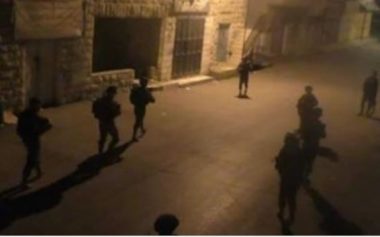 The Jenin office of the Palestinian Prisoners’ Society (PPS) said the soldiers abducted a former political prisoner, identified as Faraj Omar Sanouri, from his home in the Eastern Neighborhood, in Jenin city.

It is worth mentioning that the soldiers conducted, at dawn, extensive invasions and violent searches of homes in al-‘Isawiya town, in occupied East Jerusalem, and abducted 43 Palestinians, including many children.

In addition, the Israeli army said its soldiers arrested fifteen Palestinians in the West Bank, excluding the 43 in Jerusalem, and that they located a pistol, during searches in Hebron, and another weapon in Beit Fajjar town, south of Bethlehem.

The fishermen sailed back to the shore without being able to fish, to avoid further Israeli attacks.