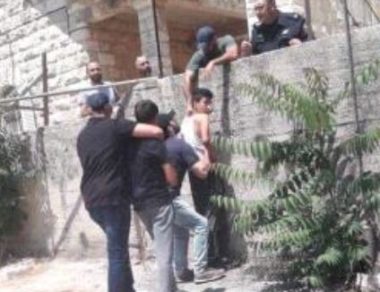 Media sources said dozens of soldiers invaded the al-‘Isawiya town, and assaulted many Palestinians, and abducted two of them, in the mourning tent of Mohammad Samir Obeid, 21, who was killed on June 27th,  during a protest in Jerusalem when Israeli soldiers shot him with several bullets, including a live round in the heart.

The soldiers fired a barrage of gas bombs, in addition to live rounds and concussion grenades at the Palestinians, leading to protests; scores of residents suffered the effects of teargas inhalation.

The Israeli invasion and attacks came during the funeral procession of the slain young Palestinian man.

Many Palestinians hurled stones, and some threw Molotov cocktails, at the invading army jeeps.

In addition, undercover Israeli soldiers infiltrated into Shu’fat refugee camp, and kidnapped two Palestinian children, before moving them to an unknown destination.

Furthermore, the soldiers, stationed at the military roadblock near the entrance of Shu’fat refugee camp, fired gas bombs, concussion grenades, and rubber-coated steel bullets, at Palestinian protesters, causing many to suffer the effects of teargas inhalation.