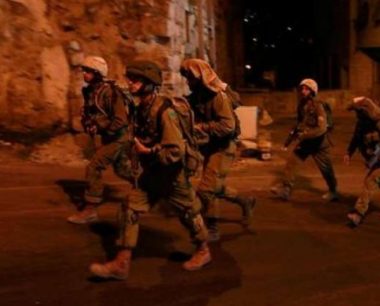 Israeli soldiers invaded, on Sunday at dawn, several areas of the occupied West Bank, broke into and searched many homes and abducted four Palestinians. The army also installed roadblocks, and summoned a father and his son for interrogation.

Several army vehicles invaded Jenin city, in the northern part of the occupied West Bank, before the soldiers stormed and searched homes, and abducted a former political prisoner and one of his relatives.

The Jenin office of the Palestinian Prisoners’ Society (PPS) said the soldiers abducted Noureddin Mohmmad Sa’adi, from his home in Sa’ada neighborhood in the city, after the soldiers interrogated him and his family.

The soldiers also abducted Hamza Sa’adi, after breaking into his home and searching it, the PPS added.

In Nablus, in the northern part of the West Bank, the soldiers invaded Beita town, south of the city, searched several homes and abducted a former political prisoner, identified as Ammar Zoheir As’ad, 32.

His family said the soldiers interrogated them while ransacking their property, and illegally confiscated sums of cash.

Furthermore, the soldiers invaded the al-‘Isawiyya town, in occupied Jerusalem, and abducted a young man, identified as Ammar Obeid, before taking him to an interrogation center in the city.

In Hebron, in the southern part of the West Bank, several army vehicles invaded Beit Ummar town, north of the city, searched homes and summoned a former political prisoner, identified as Hamdi Zamel Abu Mariya, 50, and his son Mohammad, 15, for interrogation in Etzion military camp and security center.

The soldiers also installed roadblocks leading to the northern entrance of the ath-Thaheriyya town, south of Hebron, before stopping and searching dozens of cars while investigating the ID cards of the passengers.

Another roadblock was installed on the main road in front of the al-Fawwar refugee camp, southwest of Hebron, and briefly detained several young men while inspecting their ID cards and questioning them.