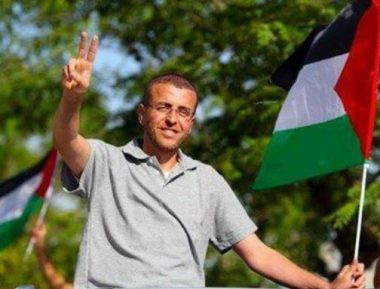 Israeli soldiers abducted, on Sunday evening, Palestinian journalist, Mohammad al-Qeeq, 34, who was released on April 19 2014, after holding a 94-day hunger strike, and detained the family members of slain Palestinians, identified as Mohannad al-Halabi, Thaer Abu Ghazala, Hussein Abu Ghosh, after participating in a peaceful procession in Bethlehem, in the occupied West Bank.

The Palestinians were in Bethlehem participating in a procession demanding Israel to release the bodies of slain Palestinians still held in Israeli morgues as an act of collective punishment against their families.

Al-Qeeq and family members of al-Halabi, Abu Ghazala and Abu Ghosh, were in a car that was stopped by the soldiers and were all held for more than one hour, before being released, and continued their way to Bethlehem to participate in the procession.

On his Facebook page, al-Qeeq said he was cuffed and placed in a military vehicle, along with members of al-Halabi, Abu Ghazal and Abu Ghosh families, while the soldiers searched the car that transported them, and later released them all.

They managed to go to Bethlehem, and participated in the nonviolent procession, that was attacked by the soldiers, but later al-Qeeq was stopped at the Beit El military roadblock, near Ramallah, while he was on his way back home, and was abducted and sent to a detention center.

It is worth mentioning that Mohammad al-Qeeq held a 91-day hunger strike, protesting being held under arbitrary Administrative Detention orders, without charges or trial, and was released on May 19, 2015.