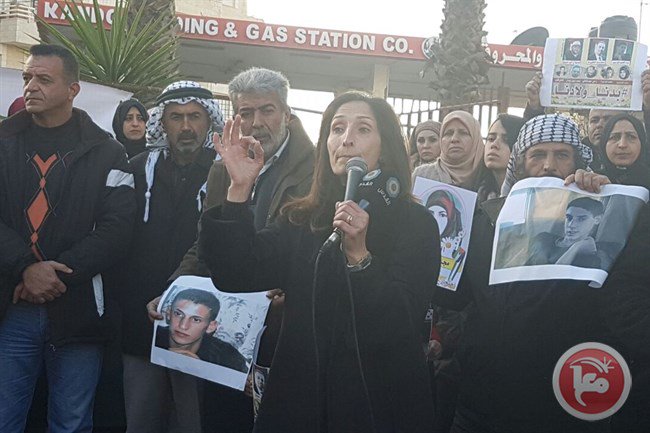 In Bethlehem Sunday, hundreds of Palestinians marched toward the Israeli Annexation Wall to protest the Israeli policy of refusing to return the bodies of deceased Palestinians to their families.

In response, Israeli forces invaded the city and fired semi-lethal weapons at the demonstrators. A number of demonstrators suffered from tear gas inhalation. Others were hit by rubber-coated steel bullets.

The protesters chanted and marched while holding Palestinian flags and mock coffins, calling on the Israeli government to release the bodies of Palestinians who died or were killed in Israel.

A number of bodies are still being held by Israeli authorities, including 8 bodies that have been held since October 2015. The funeral requirements enforced by the Israeli government for families wishing to bury their deceased family members include financial guarantees, restriction on the numbers of the attendees at the funeral to 50 or less, designation of the locations of the burials and prohibition on the use of electronic devices at funerals.

In 2016, the UN Committee Against Torture called upon the Israeli authorities to “to return the bodies of the Palestinians that have not yet been returned to their relatives as soon as possible so they can be buried in accordance with their traditions and religious customs, and to avoid that similar situations are repeated in the future” (paragraph 43).

The human rights organization Addameer issued a statement last year considering the practice of the withholding of the bodies to be a form of collective punishment and violation of the right to dignity, freedom to practice culture and freedom of religion. The group stated that the withholding of the bodies adds to the severe grief and trauma of families of the deceased and obstructs the possibility of investigations through forensic autopsies in order to establish the circumstances of the killings.

The march on Sunday in Bethlehem was organized by a number of organizations, following a call by the Committee of the Families of Slain Palestinians, based in Hebron.

After a rally with speakers including local political leaders and family members of deceased Palestinians, the demonstrators marched toward the barrier Wall that has been constructed by Israeli forces over the past 13 years to completely sever Bethlehem from Jerusalem.

As they neared the Wall, a squadron of Israeli soldiers deployed into the street in front of them, holding automatic weapons and firing less-than-lethal rounds into the crowd.

The march dispersed at that point, but some youth arrived and threw stones at the soldiers, who retreated back to the Bethlehem military checkpoint.