Army Abducts Four Palestinians, Injures Two Of Them, In Ramallah 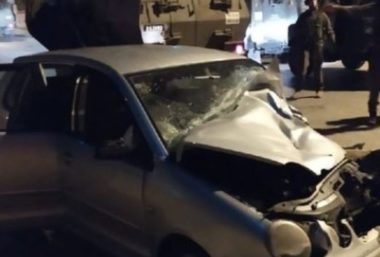 Israeli soldiers abducted, on Thursday at dawn, four young Palestinian men, after injuring two of them, including one who suffered serious wounds, near the al-Am’ari refugee camp, in the central West Bank city of Ramallah.

Media sources said the soldiers opened fire at a Palestinian car near the refugee camp, and abducted the two young men, before moving them to an unknown destination.

The Israeli army claimed that the driver of the car “attempted to ram under-cover soldiers with his car,” and that he then stepped out of the vehicle “before attempting to attack them with a knife.

The invasion was carried out by at least twenty armored military vehicles, before the soldiers stormed and ransacked homes, and abducted two Palestinians, identified as Bara’ Badra, and Islam Nimir.