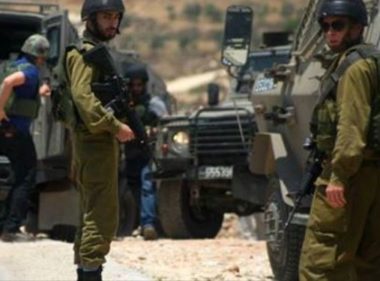 Israeli soldiers shot, Thursday, two Palestinian workers near the military gate, which was installed on Barta’a town lands, near the northern West Bank city of Jenin, as they were on their way to work.

Mahmoud Sa’adi, the head of the Emergency Department at the Palestinian Red Crescent Society’s office in Jenin, said the soldiers shot Mohammad Ahmad Nawasra, 24, from Fahma town, and Omar Jamal Obeid, 23, from Arraba town, near Jenin.

Nawasra was shot with live rounds in his legs, while Obeid was shot in his left leg, before the soldiers interrogated them, and handed them to Palestinian medics. The two were trying to cross a gate of the illegal Annexation Wall in the area.

It is worth mentioning that the soldiers have injured seven Palestinians in the last two weeks in the same area, and under similar circumstances.