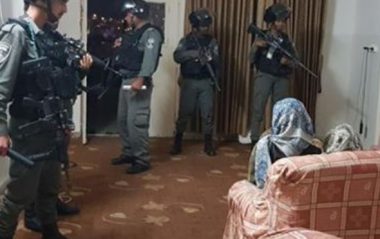 It added that the soldiers also invaded homes in Husan town, west of Bethlehem, and abducted Rami Mohammad Hamamra, 22.

Furthermore, the soldiers abducted Ziad Ahmad Jibril, 40, and Mojahed Kamel Jibril, 29, from their homes in Teqoua’ town, east of Bethlehem.

The soldiers also invaded and ransacked many homes in Hebron city, illegally confiscated thousands of shekels.

In addition, the soldiers invaded and searched homes in Ethna town, west of Hebron, and abducted Marwan Hdeib.

Owners of some of the invaded homes have been identified as Samir Halahla, Mahmoud Dweik, Nour Ashour, Ali Qawasmi and Jamal al-‘Adam.

In Ramallah, in central West Bank, the soldiers abducted Motayyam Awad Rimawi, from his home.

The soldiers also abducted Yazan Nazzal, from Jenin, after stopping him at a military roadblock, near Bethlehem, while he was heading back home.

The army claimed that two young men hid weapons near the colony, and the soldiers located the weapons, and took the two to an interrogation facility.