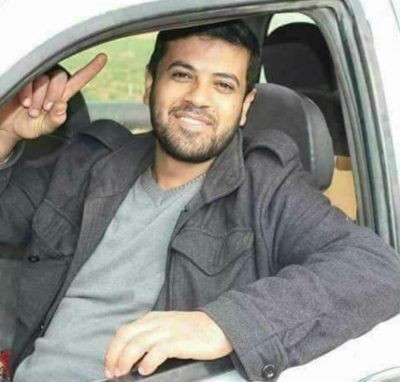 The Palestinian Health Ministry in the Gaza Strip has reported that a young Palestinian man, who was shot and seriously injured by Israel army fire, last month, has succumbed to his wounds, Sunday.

The Ministry said the Palestinian, identified as Mohammad Na’im Hamada, 30, was shot by Israeli soldiers during the Great Return March, on May 14.

Hamamda, from Jabalia refugee camp, in northern Gaza, was shot east of Gaza city, and was rushed to a Palestinian hospital, suffering very serious wounds.

Hamamda’s condition apparently witnessed a brief partial recovery, a few days ago, and he celebrated his daughter’s sixth birthday from his hospital bed, but later suffered another serious deterioration, and died from his wounds.

On Friday, the soldiers killed a volunteer medic, identified as Razan Ashraf Najjar, and injured 100 others, including 40 with live fire. On Wednesday, a young man, identified as Naji Maisara Abdullah Ghneim, 23, succumbed to serious wounds he suffered when was shot by an Israeli soldier stationed across the border fence, east of Rafah, in the southern part of the Gaza Strip, a few days earlier.

The young man was moved to a hospital in Gaza, and then to another hospital in Jerusalem, due to the seriousness of his condition, but succumbed to his wounds.

The Health Ministry said the soldiers have killed 120 Palestinians, and injured more than 14000, including 330 who suffered life-threatening wounds.