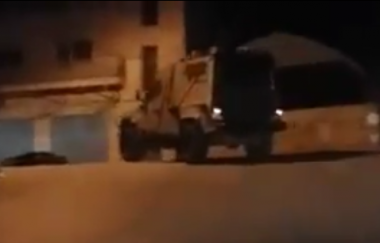 Israeli soldiers invaded, on Thursday at dawn, the town of Silwan, in occupied East Jerusalem, Beiteen and Beit Rima villages, in Ramallah, in addition to Beit Sahour city, in Bethlehem governorate, and abducted six Palestinians.

It is worth mentioning that clashes took place, last night, in Ein al-Louza neighborhood, in Silwan, after the soldiers invaded it.

In Ramallah governorate, in central West Bank, the soldiers invaded and searched homes in Beiteen village, east of the city, and abducted Abdul-Aziz al-Yassini, Abed al-Yassini and Hamada al-Yassini.

The soldiers also invaded Beit Rima village, northwest of Ramallah, and abducted a young man, identified as Fadi ad-Deek, from a local home.

Media sources in Ramallah said Fadi is from Kafr ad-Deek village, in Salfit governorate, in the northeastern part of the West Bank.

The soldiers also clashed with many local youngsters, and fired many live rounds.

It is worth mentioning that the soldiers attempted to abduct Fadi, in a previous invasion into Beit Rima, but he managed to escape.

in  related news, the soldiers invaded Deir Abu Mashal village, in Ramallah, and detonated the family home of Adel Ankoush, who was killed along two other Palestinians, on June 16th 2017, after attacking Police officers with knives and guns, killing a border policewoman, identified as Hadas Malka, 23.