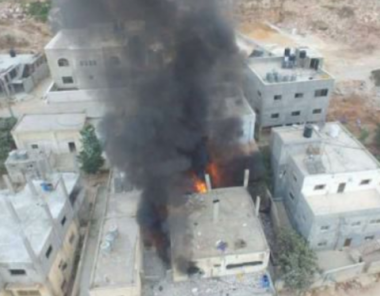 Dozens of Israeli soldiers invaded, on Thursday at dawn, Deir Abu Mashal village, northwest of Ramallah, and detonated the family home of Adel Ankoush, who was killed along two other Palestinians, on June 16th 2017, after attacking Police officers with knives and guns, killing a border policewoman, identified as Hadas Malka, 23.

The soldiers isolated the village, after surrounding it, and wired the Palestinian home before detonating it, also causing damage to several surrounding homes.

On August 10th, the soldiers detonated the family homes of the two other Palestinians, identified as Bara’ Saleh 18, and Osama Ata, 19.

The army wanted to demolish the Ankoush family home, but sealed it shut instead due to its proximity to other homes, yet, the soldiers went ahead and demolished it today at dawn.