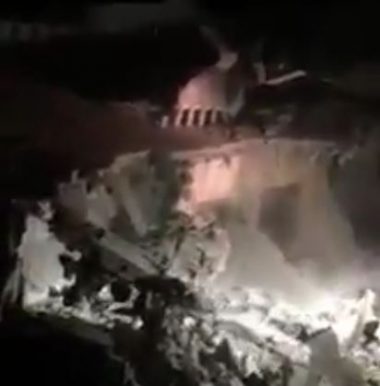 Israeli soldiers invaded, on Thursday at dawn, Deir Abu Mashal and Silwad towns, in the central West Bank governorate of Ramallah, and demolished three homes belonging to the families of two slain Palestinians, and a detainee, involved in attacks that led to the death of two Israeli soldiers.

The army wanted to detonate the home of Ankoush, but could not do so since it is very close to many overpopulated homes and flats.

On June 16th 2017, the three Palestinians were killed by Israeli army fire, and two Palestinian bystanders were wounded; one suffered a moderate injury, and the other was mildly wounded.

Israeli daily Haaretz said the Palestinians were shot and killed after attacking Police officers with knives and guns, killing a border policewoman, identified as Hadas Malka, 23.

The invasion and demolitions led to clashes between the soldiers and dozens of local youngsters, who hurled stones and empty bottles on the military vehicles, while the army fired many live rounds and gas bombs, causing scores of residents to suffer the severe effects of teargas inhalation.

The army also invaded Silwad town, northeast of Ramallah, and demolished the family home of a detainee, identified as Malek Hamed, 21, who was taken prisoner after the army claimed he carried out a deliberate vehicular attack, killing Israeli sergeant Elichai Taharlev, 20, of the Golani Brigade.