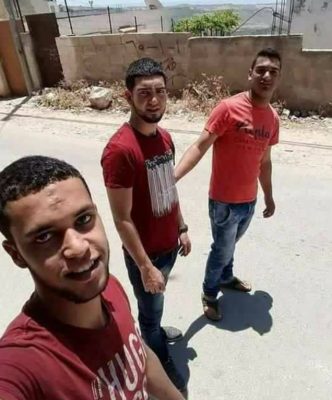 Three Palestinians were shot dead, on Friday evening, after stabbing and opening fire on Israeli soldiers, killing one and mildly wounding another, in Sultan Suleiman Street, near Bab al-Amoud (Damascus Gate), in occupied Jerusalem. The slain Israeli officer has been identified as Hadas Malka, 23; Israeli daily Haaretz said the officer was stabbed while trying to reach for her gun.

The police and the soldiers fired many live rounds, killing the three Palestinians, and wounding two Palestinian bystanders; one suffered a moderate injury, and the other was mildly wounded.

Following the incident dozens of Israeli soldiers and officers were deployed in the area, closed all the gates leading to Jerusalem’s Old City, and assaulted many Palestinians, especially in the areas leading to the Al-Aqsa Mosque.

Update: The soldiers also assaulted many Palestinains, and clashed with local youths, wounding many with live fire and rubber-coated steel bullets.

One of the wounded Palestinians was shot with a live round in his spine, and another round in his kidney, while the soldiers chased the ambulance to the Al-Makassed Hospital in Jerusalem, but were unable to invade it, after dozens of Palestinians clashed with them, and prevented them from entering the hospital.

The soldiers warned that they will shoot and kill any Palestinian who is seen walking outside at night, and that the siege will continue until further notice.