Netanyahu Not Welcome to Greece: KOE 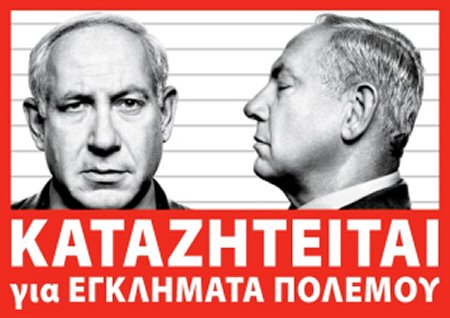 nsnbc : A number of left-wing, anti-war and anti-imperialist organizations, including the Communist Organization of Greece, have responded to the call of the Popular Front for the Liberation of Palestine to protest the visit of Israeli Prime Minister Benjamin Netanyahu and demanded his expulsion from Greece.

Demonstrations are scheduled in the Greek capital Athens on June 15 at 7:pm local time, at the Israeli Embassy as well as in Thessaloniki at the Venizelos Statue. The Greece-Cyprus-Israel summit will take place in Thessaloniki, following Greek Prime Minister Alexis Tsipra’s invitation to the President of the Republic of Cyprus Anastasiades and the Prime Minister of Israel, Benjamin Netanyahu.

The protesters and participating organizations are blaming Israel’s for its role in Palestine as well as its role in wars and conflicts throughout the Middle East. Also criticized is Israel’s role as protagonist of what is described as U.S. President Donald Trump’s war campaign against Iran and anyone else blocking US plans in the region. In a joint communique the organizations stated also that the Tsipras-Kammenos government’s cooperation with “state-terrorists” and adventurous choices jeopardize the real interests of Greece.

The organizations also stress that Tsipras and Anastasiadis are ambitious to turn Greece and Cyprus into a transit center for the transfer to Europe of the natural gas that the Israeli occupation steals from the Palestinians. IN a joint communique they state among others:

We did not expect from «leaders» who did not hesitate to sell out the national wealth and the sovereignty of their country to become aware when an other people is victim of occupation and theft … Peoples of Greece and Cyprus, on the other hand, have every reason to oppose this shameful co-operation, which also legitimizes the plundering of the natural resources of occupied Cyprus by Ankara, and semi-colonial Greece from its «EU-partners». Moreover, it downgrades the remains of the Greek-Arab friendship.