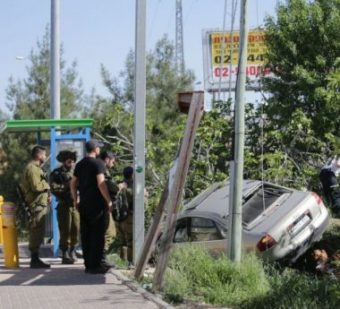 Update: Israeli sources initially did not release the name of the soldier, or even information indicate that he was a soldier, but hours later identified him as sergeant Elichai Taharlev, 20, of the Golani Brigade.

One Israeli was killed, and another suffered mild wounds, Thursday, in what Israel called a deliberate ramming attack, carried out by a Palestinian driver, who was detained at the scene, at the junction of Ofra illegal Israeli colony, east of Ramallah, in the occupied West Bank.

Israeli daily Haaretz quoted an emergency medical responder stating that the Palestinian drove his car into a group of soldiers standing near the bus stop, adding that security poles, that were installed by the army after a previous similar incident, protected Israelis who were waiting for the bus from being hurt.

The Israeli police believes that the Palestinian driver, identified as Malek Ahmad Hamed, 21, from Silwad town, east of Ramallah, “deliberately rammed the two Israelis while at the junction outside Ofra colony.”

The Palestinian was detained at the scene, and was instantly moved to a military interrogation facility.

Following the incident, dozens of Israeli colonists closed main road near Ofra to all Palestinian traffic, and prevented them from driving through, while Israeli soldiers stood nearby without attempting to remove them.