Army Abducts Three Palestinians In Jenin, One In Hebron 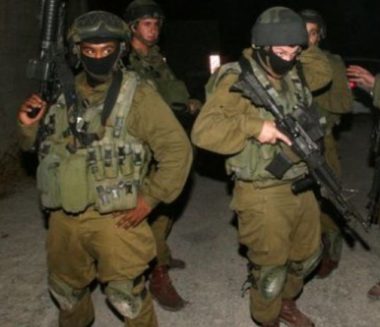 Israeli soldiers abducted, Wednesday, three Palestinians, including two former political prisoners, in Jenin, in northern West Bank, and one in Hebron, in the southern part, after the army invaded and searched several homes.

The Jenin office of the Palestinian Prisoners’ Society (PPS) has reported that the soldiers invaded and searched several homes in Burqin and Sielet al-Harithiyya towns, and Jenin city, before abducting three Palestinians.

Two of them are former political prisoners, identified as Mohammad Sa’id Qabalawi, from Burqin town, and Hasan Mustafa Jaradat, from Sielet al-Harithiyya.

The PPS added that the soldiers also abducted Mohammad Ahmad Jaradat, from his home in Jenin city.

Furthermore, dozens of soldiers invaded the al-‘Arroub refugee camp, north of the southern West Bank city of Hebron, and searched many homes.

Owners of some of the invaded homes have been identified as Hazem Sa’adi, and his brothers, Ayman, Eyad, Ziad and Osama.

The soldiers also abducted a young man, identified as Hafeth Mohammad al-Fasfous, from Abu al-‘Asja village, south of Hebron, after stopping him at a nearby military roadblock near the as-Sammoa’ Junction.

In Related news, the soldiers invaded the towns of Beit Awwa, south of Hebron, and Surif, west of the city.

In the Gaza strip, several army vehicles invaded Palestinian lands close to the perimeter fence, in the northern part of the coastal region, and bulldozed them while firing live rounds to force the Palestinians away.