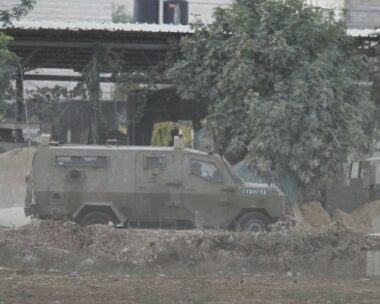 On Wednesday dawn, Israeli soldiers abducted two Palestinians in Nablus and Tulkarem, in the northern part of the occupied West Bank.

In Tulkarem, the soldiers invaded the Sheika area in the northern part of the city, searched homes, and abducted Kayed Nayfa.

Media sources in Nablus said several army jeeps invaded many neighborhoods in the city before storming and ransacking homes and interrogating many Palestinians while inspecting their ID cards.

It is worth mentioning that, on Tuesday evening, the army closed the iron gate the soldiers installed on the main entrance of the Al-Lubban Ash-Sharqiya village, south of Nablus, and prevented the Palestinians from crossing.

The army frequently closes the gate between evening and midnight, forcing the Palestinians to seek longer alternate streets.

Also Wednesday dawn, the soldiers abducted four Palestinians, including two siblings, in the Ramallah governorate, in the central part of the occupied West Bank.