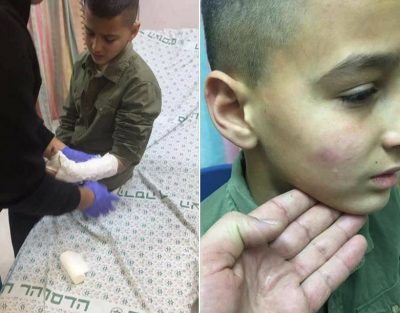 Israeli soldiers abducted, on Sunday at dawn, three Palestinians and injured a child, during extensive and violent searches of homes, in the town of al-‘Isawiya, in occupied East Jerusalem, after the army isolated it since Saturday evening.

Media sources in Jerusalem said the soldiers surrounded and isolated the town, on Saturday evening, before many armored military vehicles invaded it, and initiated extensive searches of homes and property.

The sources added that dozens of residents protested the invasion near many roadblocks, installed by the army in their town, despite the heavy rain and the cold, and said that the constant invasions are illegal acts of collective punishment.

During the violent invasion of homes, the soldiers abducted Mohammad Mahmoud Salah, after assaulting him and his entire family, leading to various cuts and bruises, in addition to causing property damage.

The soldiers also abducted Mohammad Abu al-Hummus, a member of the local Follow-Up Committee, in addition to Yousef Froukh.

Furthermore, the soldiers assaulted a child, identified as Saifeddin Mohannad ‘Obeid, only nine years of age, causing various injuries, including fractures in his left hand, before he was rushed to a local hospital.