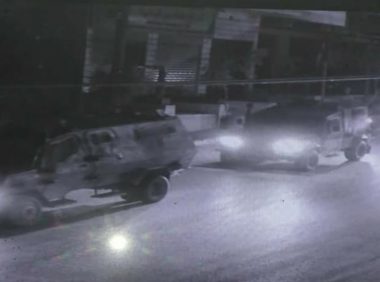 Israeli soldiers invaded, on Sunday at dawn, Beit Ummar town in the southern West Bank city of Hebron, abducted three Palestinians, and injured another in addition to causing many to suffer the effects of teargas inhalation.

Several army jeeps invaded the town, and fired many rubber-coated steel bullets and gas bombs at many Palestinians, who gathered in the center of the town.

They added that many Palestinians suffered the effects of teargas inhalation and received the needed treatment.

Furthermore, the soldiers invaded and ransacked several homes in the town, and abducted a former political prisoner, identified as Hamza Mohammad Ekhlayyel, 21, in addition to Bassel Jamal Breigheeth, 20, and Mohannad Breigheeth, 19.