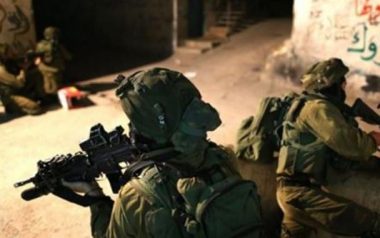 Israeli soldiers abducted, on Wednesday at dawn, twenty-two Palestinians, including the governor of occupied Jerusalem, Adnan Gheith, and a lawyer, identified as Midhat Deebiyya, from their homes Silwan and the al-‘Isawiya towns.

The soldiers conducted very violent searches of homes, and interrogated dozens of Palestinians, before abducting 23 of them, and took them to the al-Maskobiyya detention and interrogation facility, in Jerusalem.

Among the abducted Palestinians is the governor of Jerusalem, Adnan Gheith, who is a also former political prisoner and was frequently abducted, interrogated and detained, in addition to the Midhat Deebiyya, a lawyer and a researcher in Jerusalem affairs.

The abductions have escalated since the Palestinians managed to reopen Bab ar-Rahma Mosque, last Friday, after it was closed by Israeli for sixteen years.

It is worth mentioning that the soldiers have abducted more than 100 Palestinians from several parts of occupied Jerusalem, and issued order against 120 Palestinians, preventing them from entering the Al-Aqsa Mosque compound.

The governor of Jerusalem also received an order preventing him from entering the West Bank for six months.