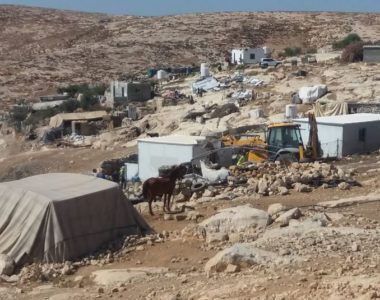 Rateb Jabour, the coordinator of the National and Popular Committee against the Annexation Wall and Colonies, said the soldiers demolished a tent and a shed, owned by Maher al-Hamamda, in the al-Maqfara area.

Jabour added that the soldiers also demolished one residential shed, owned by Mahmoud Hussein Hamamda, in the same area.

In addition, the soldiers confiscated a car, owned by Masafer Yatta Village Council, in addition to destroying a water network extending from the Tiwani village to Masafer Yatta.

Furthermore, the soldiers abducted the head of the Tiwani Village Council, Mohammad Rib’ey, in addition to Bakr Fadel Rib’ey.

It is worth mentioning that the soldiers also invaded many communities, south of Hebron, searched homes, tents and cave, in areas between the illegal Ma’on and Avigal colonies.