Army Abducts Two Palestinians, Including A Woman, In Hebron 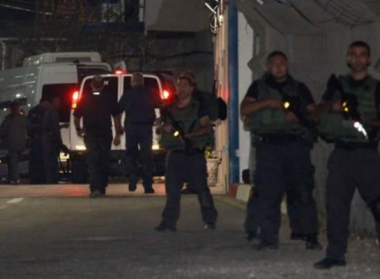 Israeli soldiers invaded, on Tuesday at dawn, several areas in the southern West Bank governorate of Hebron, searched homes and abducted two Palestinians, including a woman who is also a former political prisoner.

Media sources in Beit Ummar town, north of Hebron, said the soldiers abducted Fida’ Mohammad Ekhlayyel, 23, from her family’s home in the town.

The former political prisoner, who was held for six months and is currently a university student, was abducted after the soldiers smashed the main doors of her family’s property and broke into it.

The soldiers also fired gas bombs and concussion grenades at many youngsters, who protested the invasion and hurled stones at the armored military jeeps.

In addition, the soldiers invaded the ath-Thaheriyya town, southwest of Hebron city, searched many homes, and abducted Mohammad Khalil Makhazra.

The army installed many roadblocks at the northern and southern entrances of Hebron, in addition to Sa’ir and Halhoul towns, before stopping and searching dozens of cars, and inspected the ID cards of the Palestinians.