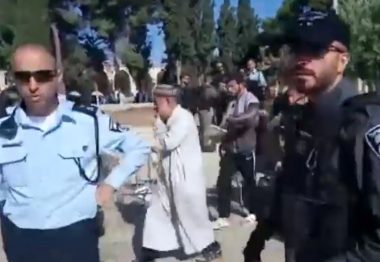 Eyewitnesses said dozens of Palestinians were siting and walking in the yard of the al-Qibli Mosque, in Al-Aqsa Mosque Compound, before the soldiers stormed it through the al-Magharba gate, to accompany groups of colonialist settlers in a provocative tour into the holy site.

They added that the soldiers attacked many young men with clubs and batons and tried to remove them from the holy site compound, before abducting fifteen of them.

Five of the abducted Palestinians have been identified as Assad Mifleh, Ezzeddin Zyoud, Mohammad Tafesh, Amjad al-Ashqar and Obeida ‘Ayesh.

The worshipers were just sitting, reading from the holy Quran and reciting its verses, in yet another day of the holy Muslim month of Ramadan, when the soldiers assaulted them.

Furthermore, the soldiers stopped many Palestinians, who were filming the invasion and the unfolding attack, and threatening to abduct them.

On Tuesday at dawn, the soldiers abducted fourteen Palestinians, including a member of the City Council in Hebron, and shot one Palestinians, in several parts of the occupied West Bank.