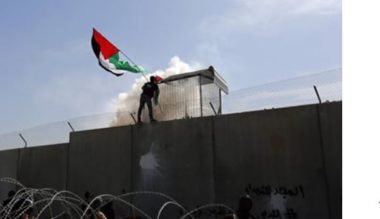 Israeli soldiers attacked, Friday, the weekly nonviolent procession against the illegal Annexation Wall and Colonies in Bil’in village, west of the central West Bank city of Ramallah, causing many to suffer the effects of teargas inhalation.

The Palestinians, accompanied by Israeli and international peace activists, marched from the center of the village heading towards the wall in Abu Lemon area, in the southern part of the village.

They chanted for liberty, independence and ending the illegal Israeli occupation and its colonies, built in direct violation of International Law and the Fourth Geneva Convention.

It is worth mentioning that the protesters called for ongoing popular resistance against the Annexation Wall and colonies, and the so-called Deal of the Century and the “Warsaw Conference,” which ignored the basic Palestinian rights, in addition to calling for the release of all detainees, the Return of the Refugees, and the liberation of Palestine.