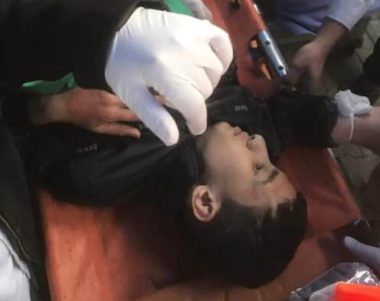 Israeli soldiers attacked, Friday, the Great Return March processions, ongoing for the 47th consecutive week in the besieged Gaza Strip, and injured dozens of Palestinians, including at least twenty with live fire, one of them a child, who suffered a life-threatening injury.

The Health Ministry in Gaza has confirmed that the soldiers shot twenty Palestinians with live fire, and added that one of the wounded is a child, 15, who suffered a serious injury after the soldiers shot him with a live round in the chest.

It stated that the child was shot east of the al-Boreij refugee camp, in central Gaza, and was rushed to the Al-Aqsa Hospital.

Furthermore, a Palestinian woman, 29, was injured with a shrapnel in her head, causing a moderate wound, before she was rushed to the Al-Aqsa Hospital.

More than 11000 Palestinians participated in the ongoing Great Return March processions this Friday, media sources in Gaza have confirmed.

It is worth mentioning that the Israeli army stated that one of its undercover soldiers was injured, Friday, after a Palestinian hurled a pipe bomb at a military jeep, near the perimeter fence in Gaza.

Media sources in Gaza said the officer opened the door of his armored jeep, and started firing live rounds at the protesters, before one Palestinian hurled a pipe bomb at the jeep, mildly wounding the soldiers in the leg.