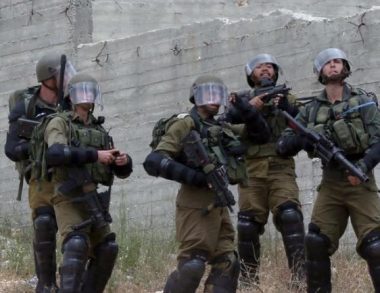 Israeli soldiers invaded, Friday, the village of Kufur Qaddoum, near the northern West Bank city of Qalqilia, and attacked the weekly procession that was held by locals, accompanied by Israeli and international peace activists.

Morad Eshteiwi, the coordinator of the Popular Committee against the Annexation Wall and Colonies in Kufur Qaddoum, said the soldiers resorted to excessive force, and fired many rubber-coated steel bullets, gas bombs and concussion grenades.

Eshteiwi added that the soldiers chased many protesters, who were marching towards the Annexation Wall and the isolated orchards, and invaded the village. The Israeli attack did not lead to any injuries and abductions.

Kufur Qaddoum residents have been holding weekly protests against the illegal annexation of their lands, the Wall and colonies, in addition to the ongoing closure of the village’s main road, which was blockaded by the military more than 14 years ago, to provide easy access to colonists, driving to and from the illegal Kidumim colony, which was built on illegally-confiscated Palestinian lands.