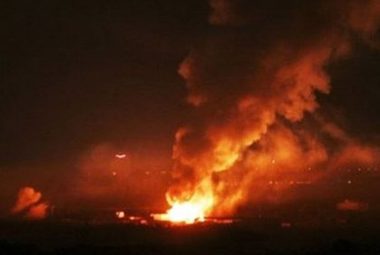 The Israeli Air Force fired, on Thursday at dawn, a number of missiles into several areas, believed to be run by the Al-Qassam Brigades of Hamas, in different parts of the Gaza Strip.

Some of the missiles detonated in open lands in a Qassam site, in the Shaima’ area, northwest of Beit Lahia in the northern part of the Gaza Strip. The Al-Qassam Brigades said the missiles caused property damage, and fires, but did not lead to any casualties.

The Israeli army said it targeted the Qassam centers in Gaza after a mortar shell landed in an open area in the Eshkol Regional Council, on Wednesday evening, and that the shell caused no casualties or property damage.