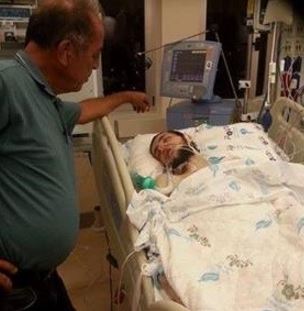 The head of the Palestinian Detainees Committee ‘Issa Qaraqe voiced an urgent appeal to the United Nations Human Rights Council, holding its 33rd session Wednesday, to immediately intervene and save the lives of all hunger striking Palestinian detainees in Israeli prisons, especially Malek al-Qadi who entered a coma after developing acute Pneumonia, and is in a very serious health condition.

Qaraqe’ said that al-Qadi, along with the two detained brothers Mohammad and Mahmoud Balboul started their hunger strikes nearly seventy days ago, protesting their ongoing illegal and immoral Administrative Detention, without charges or trial.

“Al-Qadi is facing death at the Wolfson Israeli Medical centers; he has been in a coma for seven days, and is now suffering from pneumonia. His heartbeats are slowing down; his eyes are swollen, and is also suffering from a urinary tract infection in addition to several complications,” Qaraqe’ said, “He remains in the Intensive Care Unit, and his body is not responding to medication.”

He added that the two detained brothers, Mohammad and Mahmoud Balboul, are also facing serious health complications, including in their eyesight, stomachs, and are frequently losing consciousness.

Mohammad is at the Wolfson Medical center while his brother Mahmoud is in Assaf HaRofeh medical center, while their health conditions are rapidly deteriorating to very serious levels that threaten their lives.

The statements of Qaraqe came during gathering in a protest, held at the Manger Square in the West Bank city of Bethlehem, in solidarity with all striking detainees,

Hundreds of Palestinians, including the family of Bilal Kayed, from Ramallah, and the family of Balboul from Hebron, in addition to the family of detained legislator, the Secretary-General of the Popular Front for the Liberation of Palestine (PFLP) Ahmad Saadat, and the head of the Palestinian Prisoners Society Qaddo
ura Fares, participated in the procession that star 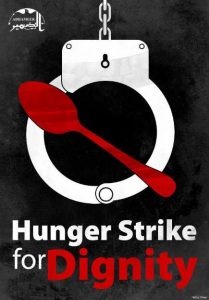 ted from the solidarity protest tent at the Manger Square, in front of the Church of Nativity.

In addition, more than fifty Palestinian detainees, held in the Negev, Nafha, Ofer and Ramon Israeli prisons and detention camps, started a hunger strike in solidarity with the Balboul brothers and Kayed.

The detainees are also demanding Israel to end its illegal policies of provocative searches and humiliation of their visiting families, and to improve the living conditions in the prisons, in addition to ending the assaults and violations against them.