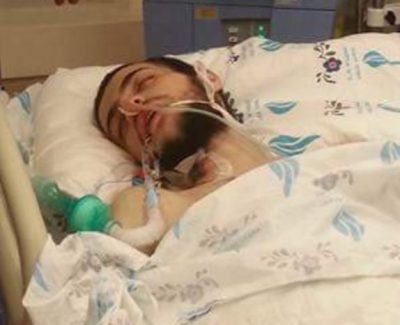 Palestinian Detainee Malek al-Qadi, who started a hunger strike 57 days ago, fell into a coma, and is currently in a life-threatening condition that could result in imminent death, the Palestinian Prisoners’ Society (PPS) has reported.

Executive head of the PPS Abdullah az-Zaghari said the Israeli Prison Authority issued an urgent permit for Malek’s parents in order to visit with him, after he fell into a coma amidst a serious, life-threatening, deterioration in his health condition.

The detainee is in Wolfson Israeli Medical Center, and has been striking in protest of his illegal Administrative Detention, without charges. He was moved to the Intensive Care Unit after the sharp deterioration.

Az-Zaghari stated that the detainees could die at any given moment, and that an Israeli court will be holding an urgent session, Sunday, to look into a petition for his release, especially due to his health condition, accompanied by the fact he never faces any charges.

This happened shortly after an Israeli court refused to void the Administrative Detention orders against him, but ‘froze’ the orders, an issue that means it could be reinstated after he recovers.

His mother voiced appeals to the Palestinian government, local, regional and international human rights groups to instantly intervene, and save the life of her son.

“My son is dying right now,” she said, “People of the world, please hear my pleads and pain.”

Detainee Malek al-Qadi is from the West Bank city of Bethlehem, and is a journalism student at the Al-Quds University in Nablus. He is also a former political prisoner who was held for four months, and only 47 days after his release, the army abducted him again.

Al-Qadi started his strike on July 15, 2016, after Israel slapped an Administrative Detention order against him, without charges.

Last week, Israel attempted to force-feed al-Qadi, but he resisted and fell onto the ground, causing several cuts and bruises, especially in his head and face.

The Palestinian Detainees Committee said the detained siblings, Mohammad and Mahmoud al-Balboul, are ongoing with their strike, protesting the illegal Administrative Detention orders against them, despite their declining health conditions.