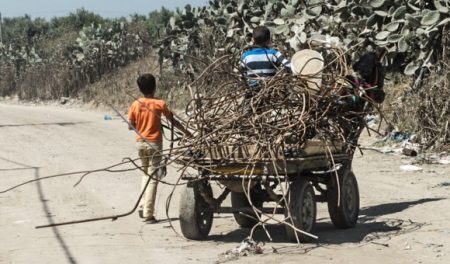 “I remember when a 14-year-old child was buried under a pile of garbage,” said Atef O., also 14, from Shuja’iyya, east of Gaza city.

Each morning, Atef scavenges in the trash pits of Gaza city for five hours before attending school. There, he collects materials to be re-sold, making only 10 to 20 shekels ($2.60 to $5.20) a day.

Once able to provide for his family, Atef’s father lost his livelihood as a result of political strife between Hamas and Fatah, Israel’s 2014 military campaign and its ongoing illegal blockade of the Gaza Strip.

“My father worked as an inspector at the Karni crossing, but following the 2007 internal fighting between Hamas and Fatah, he lost his job,” Atef said. “He had to work as a taxi driver to support us after that.”

Two years ago, during Israel’s assault on Gaza, an Israeli bombardment struck his uncle’s house, destroying his father’s taxi. “After that, Kamal, my brother, started working in the trash pits to collect plastic, steel, and gravel to sell so he could support us. He asked me and my brothers to help,” Atef told Defense for Children International – Palestine.

Atef works early in the morning during the school year and long days during the summers in the trash pits near the sealed-off border between Gaza and Israel. He described in detail the many perils he faces to earn a few shekels a day.

“It is dangerous because the dumpster is about 200 meters [656 feet] from the border fence, which means we come under Israeli fire and stop working,” he continued. “Many times Israeli tanks moved into the area and bulldozed it. We have to leave because the army could shoot anyone on sight.”

In addition to his concerns about live fire from Israeli forces posted at the border, Atef worries he will be injured by one of the garbage trucks again.

“The most important thing is to be alert all the time. There are hundreds of workers there. Trucks empty the garbage, and the workers race each other to collect what we can before the bulldozer pushes the garbage down into the hole. It’s dangerous because you can slip, and fall under the bulldozer or truck,” he told DCIP. “I am scared that I could be run over. I once was injured by one of the trucks.”

In the winter, Atef told DCIP that the risk of falling is worse as the ground can become wet and slippery. During the warmer months, smoke inhalation and fires from burning garbage pose serious safety risks. “Some of the dumpsters are on fire when they are dumped. Sometimes the firefighters are called to the area because the fire is so big,” Atef said.

The trash sites may also contain hazardous waste, chemicals, used medical devices, and explosive remnants of war (ERW). Atef told DCIP that he has contracted infections, and one of his relatives, 16, was injured by shrapnel.

According to United Nations Mine Action Service (UNMAS), some 7,000 ERW remained after the 2014 war in Gaza. Two years later, 2,953 ERW have been cleared, but thousands likely remain.OCHA states that ERW from the 2014 hostilies have caused 17 fatalities and 100 injuries, 46 of which were to children.

When Atef is well and not working, he tries to keep up with his studies. “Most of the days I am late for school because of my work at the dumpster. I got kicked out like six or seven times because I was late,” he said.

Between January and April 2016, DCIP field workers collected 10 affidavits from child laborers working in harsh hazardous conditions in Gaza. Many of their roles were informal, such as collecting scrap metal or street vending. Like Atef, half of the child laborers DCIP interviewed were still attending school.

While laws exist to safeguard these children, Gaza’s scant implementation budget has done little to abate child labor, which is fueled by steep and widespread poverty.

In 2004, the Palestinian Child Law No. 7 set the minimum age for employment at 15 years of age and 18 years of age for hazardous work. This law made employing a child under the age of 15 illegal and punishable by fines or closure, after repeated violations. In 2014, the State of Palestineacceded to the Convention on the Rights of the Child (CRC), which includes protections from exploitation, hazardous conditions, and work that is harmful to a child’s physical or mental development.

Despite the existence of these laws, progress on implementation has been slow and ineffective due to severe staff and budget deficits. In 2010, UNICEF reported that there were no dedicated juvenile labor inspectors working for the Palestinian Ministry of Labor (MOL) and as such, no data on juvenile inspections.

By 2014, the U.S. Department of Labor found little advancement in closing the regulation gaps. The report detailed that the MOL was understaffed by an estimated 258 inspectors and only 12 inspectors were trained on child labor issues. As a result, the MOL inspected less than 10 percent of the mandated 100,000 registered businesses that year.

These numbers do not account for informal and unregistered work spaces, which may involve child labor, such as street vending.

A further implementation challenge stems from a 2009 departmental change, when the Child Rights Protection Unit was transferred to the Ministry of Social Affairs (MOSA). This change meant that when the MOL carries out its inspections, it can no longer directly penalize businesses employing children under the age of 15. Shadi Halas, Deputy General Director of Inspection and Work Protection for Gaza’s MOL, told DCIP that all MOL inspectors can do when they spot this violation is “draw the attention of the facility’s owner because he does not have the authority to have the owner arrested.”

Although there are no comprehensive statistics on the current prevalence of child labor in Gaza or the West Bank, the Palestinian Central Bureau of Statistics (PCBS) has worked to register thousands of child laborers.

In a correspondence with DCIP, PCBS reported that there were 2,800 child laborers aged 10-14 and 6,900 aged between 15-17 in Gaza, in 2015. This number is likely higher given that the PCBS noted their data collection and maintenance systems are relatively new, dating only to 2009, and suffer from reporting differences across departments.

As humanitarian conditions across all indicators remain tenuous in Gaza, and the blockade continues to stifle recovery efforts, many children, like Atef, have little choice but to work.

“None of my classmates make fun of me because of what I do because most of them work at the dumpster or with their parents,” Atef said. “I know I am not supposed to do this job, but there is nothing I can do about it. We will die if we do not work.”