Nimir Family; “Our Son Was Executed In Cold Blood” 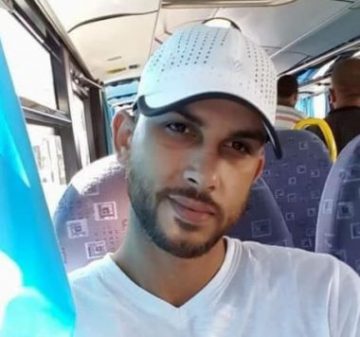 The family of the young Palestinian man, Mustafa Nimir, 27, who was shot dead on Monday at dawn by Israeli soldiers invading Shu’fat refugee camp, northeast of occupied Jerusalem, said their son was executed by the soldiers in cold blood, and that he was heading home carrying food when he was killed.

The statements match various statements of eyewitnesses who saw the soldiers killing Nimir, and wounding his relative Ali, before the army took his body, and never returned it.

The soldiers are also refusing to allow the family of the wounded Palestinian, Ali Taiseer Nimir, 25, to visit with him in the hospital, and are not giving his family any information about his injuries. The two relatives were shot while driving back home in Shu’fat refugee camp, when the soldiers invaded the camp, and opened fire on their car. The army later claimed the two men had attempted to ram the soldiers with their car – in direct contradiction to the accounts of eyewitnesses.

The father, Mustafa Nimir, said his son left home on Sunday evening, and headed towards his brother’s home.

“At midnight, I phoned Mustafa, and he told me that he, and his brother-in-law Ali, were still at his brother’s home, and that they would be a little late,” Mustafa added, “But later, around 4 at dawn, we got the horrible news of his murder.”

In addition, the mother said that the two were carrying fresh baked goods from the early-morning bakery in their car, bringing it home, and that Ali had also bought clothes for his little daughter. “Yet, Israel is claiming they tried to ram the soldiers with their car,” she added, “Those lies and fabrications are constantly being used as justification for murdering unarmed Palestinians.”

For his part, the father said that he rushed to the hospital, but the police refused to give him any information about his slain son, even the location of his corpse.

Nazek Gheith, a Palestinian woman from Anata, said she was awoken by the sounds of gunfire, which she said sounded so close that they could have been in her own home.

“I rushed to my balcony, and saw dozens of soldiers surrounding the car, and extensively firing towards it,” she stated, “they shined their flashlights into the car, and opened fire…”

The woman also stated that there was an undercover soldier who opened the driver’s door, and was shouting and threatening to kill the driver. “The wounded young man raised his hands into the air, and I could hear him say ‘I did not do anything wrong…,” she added, “They dragged him from his feet, placed him onto the ground, pointed the guns at him and ordered him to remove his pants… he was bleeding, and they thoroughly searched him.”

Gheith further stated that two army jeeps later arrived at the scene, opened the other door of the Palestinian car, before removing Mustafa’s corpse, placing it on a stretcher and taking it to their jeep. The soldiers also took the wounded man, and moved him to another jeep.

“The soldiers never provided the slain Palestinian with urgently-needed medical help; they left him for more than 30 minutes – even the wounded man was left bleeding before he was later moved to a military jeep.” A young man who also witnessed the shooting said the soldiers invaded the main road that links Shu’fat refugee camp and Anata town, and started pointing their vehicles’ searchlight at many homes and buildings.

He added that the invasion led to limited clashes between young men, and the invading soldiers; the young men hurled stones while the soldiers fired rubber-coated metal bullets.

“But then a white Opel Corsa drove into the camp, before undercover soldiers in the car opened fire at the vehicle that was driven by Ali Nimir, who was not even speeding,” he stated, “The soldiers weren’t in the middle of the road, but they fired many live rounds, causing him to crash into a parked car.” After the fatal shooting, extensive clashes took place in the camp, with Palestinian youth throwing stones at the over 150 Israeli soldiers who invaded the area after they shot the two young men.