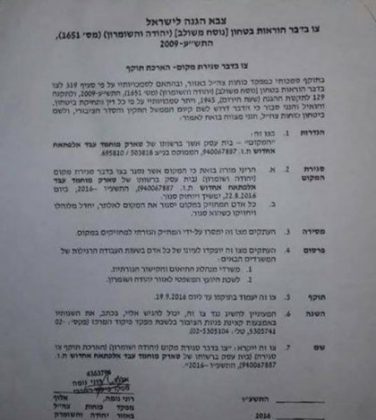 The Hebron office of the Palestinian Prisoners’ Society (PPS) has reported that Israeli soldiers have kidnapped, Tuesday, four young men in the Hebron district, searched many homes and stores, and handed a demolition order against one home. The soldiers earlier shut down a store for “selling fireworks.”

The PPS stated that the soldiers used excessive force in breaking into many homes and stores, and violently searched them, causing excessive damage, before kidnapping four Palestinians.

It added that the soldiers also invaded the town of ath-Thaheriyya, south of Hebron, and kidnapped a young man, identified as Tha’er Nael Abu Sharkh.

In addition, the soldiers invaded homes in Surif nearby town, and kidnapped one Palestinian, identified as Mohammad Ibrahim al-Hoor.

The soldiers also ordered a shop shut for “selling fireworks” that the youngsters allegedly use against the army.

In Tarqoumia town, west of Hebron, the soldiers invaded the home of Ala’ Fawzi Ghazi Qa’war, and handed him a demolition order against his property.

The soldiers surrounded the property before invading it, and handed the demolition order under the pretext that the building did not receive a construction permit from the Israeli side.

In related news, the Hebron office of the Palestinian Prisoners Society (PPS), in the southern part of the West Bank, said the soldiers invaded homes in the city, and Surif nearby town, kidnapped three Palestinians, and shut down a store that sells fireworks.

Israeli soldiers kidnapped, overnight and on Tuesday at dawn, three Palestinians from Hebron city, in the southern part of the occupied West Bank, and Surif town, northwest of Hebron, and shut down a store that sells fireworks.

The Hebron office of the Palestinian Prisoners Society (PPS) said the soldiers invaded homes in the city, searched them causing damage, and kidnapped Ahmad Yousef Abu Sbeih in addition to Mahmoud Rajabi.

It added that the soldiers also invaded homes in Surif town, and kidnapped one Palestinian, identified as Mohammad Ibrahim al-Hoor. 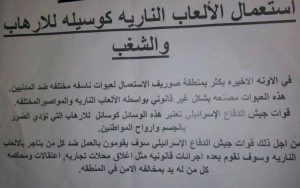 Also in Surif, the soldiers invaded a store, owned by Tareq Ehdoush, after smashing its front door, and ordered the store shut for “selling fireworks that were used in attacking the army,” according to leaflets distributed by the military.

The statement claims the fireworks “are used in terrorist attacks that are harming people and property,” and that the military considers the fireworks to be illegal “and will be acting against anybody who sells them, or uses them.”

The statement added that some of the penalties for violating the military orders are fines, prosecution, and imprisonment.