Army Seizes Agricultural Road For Settler Use in Qaryut Village 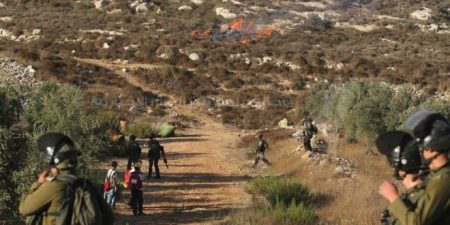 The Israeli army’s civil administration, on Monday, decided to annex a dirt road used by Palestinian villagers for agricultural purposes, in Qaryut village, south of Nablus, for use by Jewish settlers.

A local activist said, in a statement, that the army would seize the dirt road and the land around it on the southern side of the village to build a road connecting the settlements of Eli and Shilo.

He said, according to the PNN, that the project poses a serious threat to the contiguity of the village and would force its residents to leave the area.

According to the plan, the entire southern road will be closed and turned into a road for the movement of cyclists, tourists and military vehicles. The appropriated road is considered the only one leading to thousands of dunams of land belonging to Qaryut villagers.