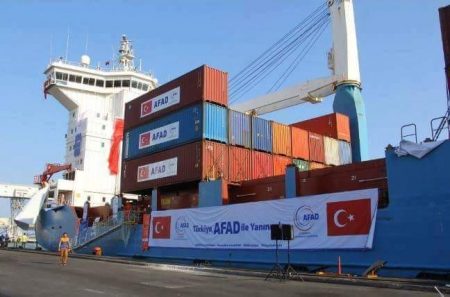 According to Al Ray Palestinian Media Agency, a new Turkish aid vessel has docked in the Israeli port of Ashdod.

In the photo, taken three days ago, the ship waits to unload its cargo for transport to the besieged enclave of Gaza.

The Gaza Strip has suffered from an Israeli military blockade since 2007, when Hamas was democratically elected to rule the territory.

Residents of Gaza suffer from high unemployment and poverty rates, as well as the consequences of three devastating wars with Israel since 2008.

The UN has warned that unless current trends were altered, the Gaza Strip could become uninhabitable for residents in fewer than five years.

“The social, health and security-related ramifications of the high population density and overcrowding are among the factors that may render Gaza unlivable by 2020,” the UN’s development agency said in 2015.

Turkish-Israeli affairs were suspended in 2010, after the Israeli attack on Mavi Marmara from the “Gaza Freedom Flotilla,” in which ten activists were killed.