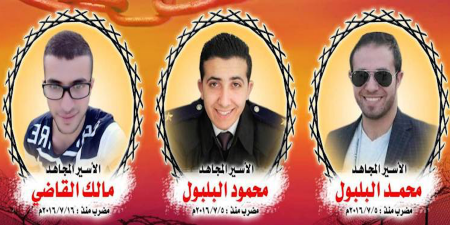 In Bethlehem, hundreds of Palestinians participated in a march in solidarity with three Palestinian political prisoners on hunger strike.

The march started at the Ministry of Education’s headquarters and, accompanied by the “freedom train,” proceeded onto Bethlehem’s main street.

During the procession, Abdullah el Zeghari, the spokesperson for the Palestinian Prisoner’s Society, said, “we organized this event today in Bethlehem as part of our ongoing solidarity with the prisoners, especially those who are on hunger strike. We loudly decry administrative detention as a grave violation of prisoners’ human rights who have been arrested without charges.”

He added, “this is also a message from Palestine to international organizations and movements to actively put more pressure on the Israeli occupation to stop unjust policies that abuse Palestinians political prisoners.”

The prisoners on hunger strike in Israeli prison are Mahmoud al-Balboul, Mohammad al-Balboul and Malik al-Qadi. All three are incarcerated via an administrative detention orders.

Qadi, 20 years old, has been on hunger strike since July 16th 2016. He is one of 25 Palestinian journalists incarcerated by the State of Israel.

Mahmoud Balboul is in intensive care are Assaf Harofeh hospital outside of Tel Aviv, while Mohammad Balboul and al-Qadi are being held in Wolfson hospital.

The Palestinian Health Minister issued an urgent press release on Sunday, in which he described the hunger-striking prisoners’ health conditions as critical, and calling for their immediate release.

There are currently 750 Palestinian administrative detainees in Israeli prison.