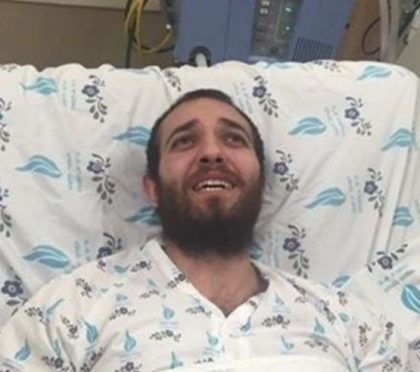 Palestinian detainee Mohammad Balboul, who started a hunger strike more than two months ago, said he is continuing with his strike despite losing his eyesight, and experiencing a seriously deteriorating health condition.

Balboul started his strike after an Israeli court renewed his arbitrary Administrative Detention, holding him prisoner without charges or trial.

He lost his eyesight more than five days ago, but remains determined to continue until Israel orders his release.
“We receive our steadfastness from the support of our people,” Mohammad said, “To the people around the world, I say the Palestinians are a strong and a determined nation.”

A video released by Arab Member of Knesset (MK) Dr. Ahmad Tibi while visiting the detainee in an Israeli hospital, showed that Balboul has become completely blind.

“Can you see my hand?” Dr. Tibi asked Balboul while waving his hand right in front of his eyes, but the detainee was unable to see the hand or the bright light from the ceiling.

“Tell me what can you see,” Dr. Tibi asked Balboul, “Nothing; I can’t see a thing” the detainee responded.

It is worth mentioning that his Balboul’s brother, Mahmoud, is also held under illegal Administrative Detention orders, and is continuing his hunger strike.

On Sunday, Mahmoud was moved from Ofer Israeli prison to Ramla hospital, after suffering a sharp deterioration in his health. He started his strike more than 28 days ago, in protest of his Administrative Detention.

Dr. Tibi also visited him and phoned his mother so that they could speak to each other, and despite his difficult conditions and his bad health, he wished his mother the best and told her he is ongoing with his strike “until freedom or death.”

Mahmoud told his mother how much he misses her, and how much he longs to being with her and the family.

“I will remain steadfast, my will is strong,” he told his mother while both of them cried together on the phone, “I miss you so much, I miss everybody, we are the sons of Ahmad, we are strong and determined to remain strong.”

His mother told him how worried she is, and how much she misses him.

In related news, Lawyer Eyad Misk, the General-Director of the Legal Unit of the Palestinian Detainees Committee, stated Wednesday that the Israeli High Court “froze” the Administrative Detention orders against the Balboul brothers, but did not void the order.

Misk added that such a ruling does not cancel the brothers’ arbitrary Administrative Detention order, which means that after the two finish medical treatment, they could be facing additional detention orders, also without charges.

The Detainee’s Committee said the Balboul brothers rejected the Israeli decision, and said that the only way to stop their strikes is for Israel to completely cancel the Administrative Detention orders.

The Committee held Israel responsible for the lives of the two detainees, and called for their immediate and unconditional release.