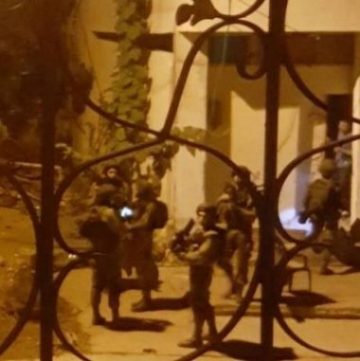 Updated — The Palestinian Prisoners Society (PPS) has reported that Israeli soldiers have kidnapped, overnight and at dawn Wednesday, at least seventeen Palestinians from their homes, in different parts of the occupied West Bank, including Jerusalem.

The Hebron office of the PPS, in the southern part of the West Bank, said the soldiers invaded and searched many homes, in the Hebron district, and kidnapped four Palestinians.

In addition, the soldiers uprooted more than 40 Dunams (9.88 Acres) of Palestinian agricultural lands, and two water wells, in Beit Ola town, west of Hebron, in the southern part of the occupied West Bank.

Israeli soldiers kidnapped, on Wednesday at dawn, three young Palestinian men, from a number of neighborhoods in occupied East Jerusalem.

The third Palestinian, a young man identified as Zoheir al-Qawasmi, was kidnapped from his home in the ar-Ram town, north of Jerusalem, after the soldiers initiated an extensive search campaign targeting many homes.