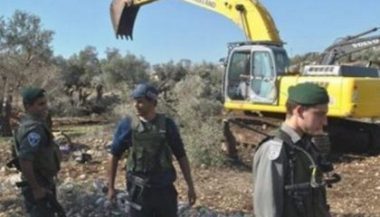 Issa al-‘Emla, the coordinator of the Popular Committee against the Wall and Colonies in Beit Ola, said the Israeli military bulldozers uprooted more than 40 of lands, belonging to Bassam Hamdan al-‘Adam, Suleiman Mohammad al-‘Adam and Ali al-‘Adam.

The lands were planted with more than 800 olive and almond trees, while the soldiers also destroyed two wells, used for collecting rainwater close to the Annexation Wall, and that the army claimed the lands were “owned by the state.”

Al-‘Emla stated that the attack was carried out although there are a number of cases that are still under deliberation by Israeli courts, and no final ruling has been issued yet.

He added that Israel is targeting the Palestinian lands in the area in order to control them for military purposes, and for the construction and expansion of its illegal colonies.

Israel has uprooted hundreds of Dunams of Palestinian lands in the same area, over the last several years, in addition to demolishing many wells and destroying the electricity networks.

On Wednesday at dawn, the soldiers kidnapped three young Palestinian men, from a number of neighborhoods in occupied East Jerusalem.