Dozens of Schoolchildren Suffer The Effects Of Teargas Inhalation In Hebron 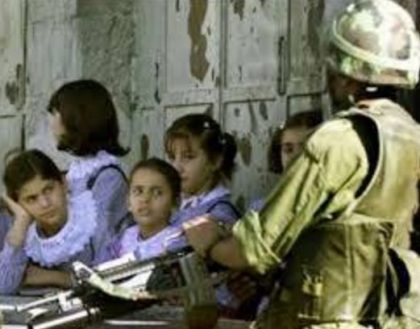 Medical sources in Hebron city, in the southern part of the occupied West Bank, has reported that dozens of schoolchildren suffered the effects of teargas inhalation, on Wednesday morning, after Israeli soldiers fired gas bombs near them at a roadblock in the city.

The sources said that the soldiers fired many gas bombs at the children as they were on their way to their schools, and were attempting to cross the Abu ar-Reesh military roadblock, west of the Ibrahimi Mosque, in Hebron.

The children were trying to reach the Ibrahimiyya, Khadija Bin al-Waleed, an-Noorin, al-Faiha’, and al-Hajeriyya schools, in the Old City of Hebron.

The soldiers also fired gas bombs and concussion grenades at many Palestinians, trying to cross the roadblock.

Palestinian medics rushed to the scene, despite obstructions from soldiers at roadblocks, and provided the wounded with the needed medical aid.