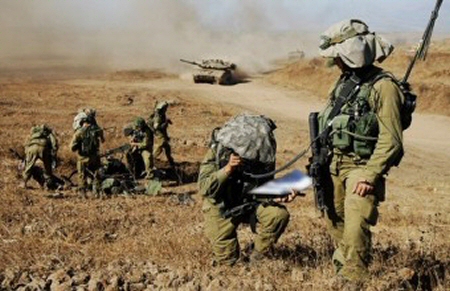 Several military training sites belonging to different political movements in the Gaza Strip were reportedly hit with Israeli fire during the predawn hours of Tuesday, according to local Palestinian and Israeli army sources, with the army saying they were responding to gunfire directed at Israeli soldiers stationed near the northern border of the besieged coastal enclave.

Palestinian sources told Ma’an News Agency that Israeli forces fired at least four artillery shells at sites belonging to the military wings of both the Hamas and Islamic Jihad movements, while two other sites were targeted by machine gun fire.

The sources said that one of the artillery shells hit a civilian home belonging to the al-Shanti family, in the town of Beit Lahiya, in the northern Gaza Strip, close to the border with Israel.

The shell reportedly caused damages to the house, though no injuries were reported.

The “Khaybar” training site belonging to the al-Qassam Brigades was also hit.

A watchtower belonging to the Islamic Jihad movement’s military wing, the al-Quds Brigades, was also hit.
No casualties or injuries were reported, though the shelling reportedly caused material damages to all the sites that were hit.

An Israeli army spokesperson said that the shelling came in response to shots being fired overnight, towards Israeli soldiers stationed across the northern border of Gaza.

The spokesperson claimed that Israeli forces had responded with two artillery shells, rather than the four reported by local sources.

Separately, Israeli troops stationed at watchtowers around the Erez border crossing, near Beit Hanoun, reportedly shot live fire at a military site used by the security services of the Hamas-run Ministry of Interior in the Gaza Strip.

The shooting caused material damages to the building. No injuries were reported.

The Israeli army claimed, in a statement, that its troops were responding to to machine gun fire from the Gaza Strip that was being directed towards Israel’s Reim Kibbutz, located just east of the central Gaza Strip.

The Israeli army fired missiles into the northern Gaza Strip two weeks ago, near the town of Beit Hanoun, that left at least five Palestinians injured, after a rocket reportedly fired from Gaza fell inside the southern Israeli city of Sderot, with no injuries or damage reported by the Israeli army.