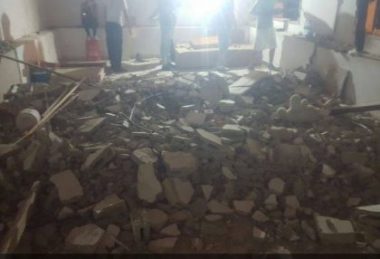 Resident Nabeeh al-Basity, 53, said he demolished his own home after Israeli courts issued several demolition orders, and he managed to delay their implementation through the courts, but the legal costs became excessively high, in addition to the accumulating fines and fees.

He added that a session was held in late July 2016, and the judge ruled for the demolition of his property, in addition to threatening to impose more fines, and imprison him, should he fail to demolish his own home.

The 60 square/meter home was built in 1997, and was inhabited by Nabeeh, his wife and three children; it consisted of three rooms and bathrooms.

The Palestinian paid fines of more than 56.000 Israeli shekels, besides the thousands in legal fees.

Also on Tuesday evening, the soldiers invaded al-‘Isawiyya town, in Jerusalem, and demolished an under-construction home belonging to Hamada Hammouda, and several walls separating his land from a land, owned by Palestinian, identified as Mahmoud Mahmoud.

In addition, the soldiers invaded Tarqoumia town, west of Hebron in the southern part of the West Bank, and delivered demolition orders against three homes.

The army said the homes, located in Wad al-Qalamoun area, are an “Area C” of the occupied West Bank, and required the approval of the military. The properties are owned by Salem Qabaja, Mazen Qabaja and Mohammad Qabaja.

On Tuesday evening, the soldiers invaded the same area, and handed a demolition order targeting the home of resident Ala Ghazi Qa’war.

On Wednesday at dawn, the soldiers kidnapped three young Palestinian men, from a number of neighborhoods in occupied East Jerusalem.