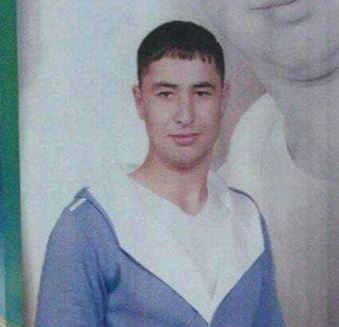 Under very strict conditions, extensive police and military deployment, and away from the media, Israeli released shortly after midnight, the body of a slain Palestinian, who was killed by the soldiers nine months ago, and only allowed a few family members to attend the funeral.

The soldiers and police closed all roads leading to Salaheddin Street, in occupied Jerusalem, and prevented even the journalists from entering.

Nadia Hassouna, the mother of the slain Palestinian, Abdul-Mohsin Hassouna, 21, said she received a special permit to come from Hebron to attend her son’s funeral in Jerusalem, and that the family, from Jerusalem, completely abided by the Israeli preconditions in order to be able to bury him.

She added that the family didn’t want to give Israel any excuses to refrain from releasing the remains of many other Palestinians who are still held in Israeli mosques.

Nadia also stated that the army forced the family to remove the word “martyr” from the wreathes. Israel handed the body to the family at the Mujahidin Graveyard, in Salaheddin Street in Jerusalem, and only allowed 25 family members to attend in addition to forcing the family to pay a 20.000 Shekels bond.

There are eleven slain Palestinians who are still held by Israel, including Mustafa Nimir, who was killed by the soldiers at dawn on Monday, September 5, 2016, after the soldiers invaded Shu’fat refugee camp, northeast of occupied Jerusalem.

Hassouna was killed on December 14, 2015, after reportedly carrying out a ramming attack in West Jerusalem. He was killed shortly after announcing his engagement to his friends and relatives, and distributed sweets on them celebrating the event.