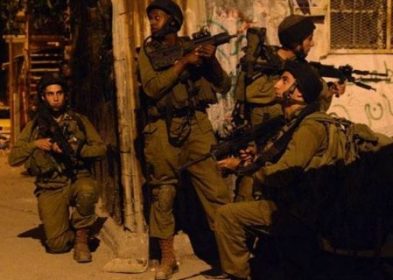 Israeli soldiers kidnapped, Wednesday, nine Palestinians, including a young woman and four members of her family, in different parts of the occupied West Bank.

The two were first summoned for interrogation after the soldiers invaded and searched their homes at dawn, and summoned them for interrogation, and were taken prisoner at noon after they went to Etzion military base and security center. Two Palestinians were kidnapped during the invasion.

In Bethlehem, the soldiers kidnapped a young Palestinian man, in his twenties, after stopping him at military roadblock #300, leading to occupied Jerusalem, and took him to an unknown destination.

In addition, the soldiers kidnapped a young man, identified as Bassam Shaweesh, from the al-Far’a refugee camp, south of Tubas in central West Bank, after the army installed a roadblock at the main entrance of the camp.

Furthermore, the soldiers kidnapped a young woman, identified as Lana Bilal Summoudi, 19, and four of her relatives, after stopping them at the al-Jalama military roadblock, north of Jenin in the northern part of the occupied West Bank.

On Wednesday morning, a number of armored Israeli military vehicles invaded Palestinian agricultural lands, east of Rafah city, in the southern part of the Gaza Strip.

On Tuesday at night, a number of soldiers attacked a Palestinian man after stopping him at a military roadblock, north of the northern West Bank city of Jenin, causing cuts and bruises that required hospitalization.