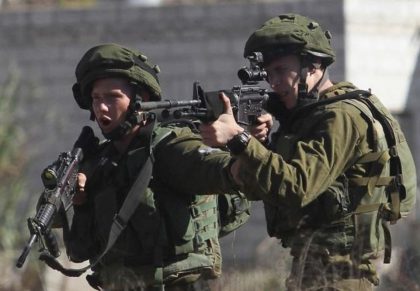 The Hebron office of the Palestinian Prisoners Society (PPS) said the kidnapped Palestinians have been identified as Amro Mohammad Awad, 16, and Odai Issa Zakrawi, 22.

It is worth mentioning that Zakrawi is a volunteer with the Red Crescent medical services in Hebron.

In addition, the soldiers invaded the home of Kamel Nayef Ekhlayyel, and informed him that they need to interrogate his son at the Etzion military base.

The son is a student of Birzeit University, in Birzeit in central West Bank, while the soldiers informed his father that he needs to return to Hebron in order to be interrogated.

On Wednesday morning, a number of armored Israeli military vehicles invaded Palestinian agricultural lands, east of Rafah city, in the southern part of the Gaza Strip.

On Tuesday at night, a number of Israeli soldiers attacked a Palestinian man after stopping him at a military roadblock, north of the northern West Bank city of Jenin, causing cuts and bruises that required hospitalization.