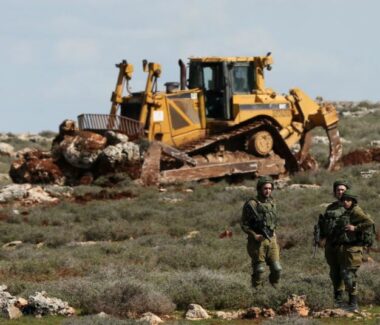 Local sources said the soldiers brought two large bulldozers and started uprooting the lands, which were illegally confiscated by Israel.

The Palestinians, the owners of the lands, have been denied access to them.

They added that the lands are near the illegal Givat Ha’Roeh and Givat Harel colonialist outposts, installed on private Palestinian lands in al-Lubban Ash-Sharqiya and Qaryout, in addition to Sinjil and Turmus Ayya villages, north of Ramallah.

The soldiers closed the entire area during the invasion, and prevented the Palestinians from entering it.

In Bethlehem, south of occupied Jerusalem, the soldiers invaded the al-Walaja village, northwest of the city, and confiscated construction materials, including cement, iron, and stones.

The local council in al-Walaja has been building a clinic to serve the Palestinians, but the soldiers frequently invade the village to stop the construction.