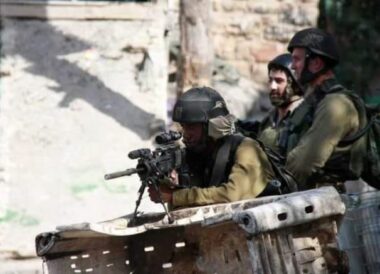 Israeli soldiers injured, Friday, a Palestinian child, during a procession in the center of Hebron city, in the southern part of the occupied West Bank.

The soldiers attacked dozens of residents protesting the ongoing closure of Shuhada Street, in the center of the city.

One child, 15 years of age, was shot with a rubber-coated steel bullet in the thigh, and many other Palestinians suffered the effects of teargas inhalation.

The child suffered a light injury before being moved to a local hospital, while medics provided treatment to Palestinians who suffered the effects of teargas inhalation.

It is worth mentioning that the soldiers closed the Shuhada Street in Hebron after the February 25, 1994 massacre, which took place after an Israeli-American colonist opened fire at the worshippers in the Ibrahimi Mosque in Hebron, killing 29 Palestinians and wounding around 150.

The fatal attack led to massive protests, and the soldiers killed 21 Palestinians that day alone.

The attacker, Baruch Goldstein, entered the Ibrahimi Mosque and launched a shooting attack against worshipers who were kneeling in morning prayer.

Baruch Goldstein is a Brooklyn-born Israeli physician. He had emigrated to Israel in 1983, and lived in the illegal Kiryat Arba settlement, based on the Palestinian lands of Hebron. He was killed by Palestinians who managed to overcome his heavy fire.