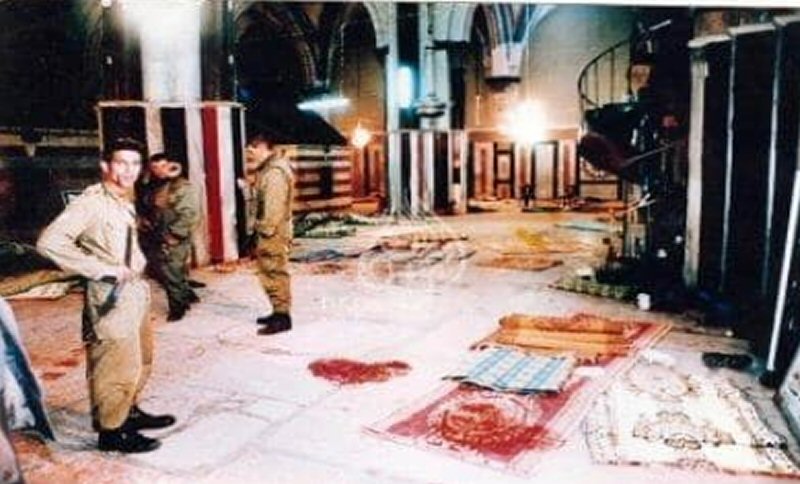 Palestinian people all over the world, on Monday, marked the 25th anniversary of the massacre which took p;ace inside the Ibrahimi Mosque, in the occupied West Bank city of Hebron, leading to 29 deaths and over 150 injuries, among worshipers.

Al Ray Palestinian Media Agency reports that, on February 25, 1994, the 15th of Ramadan, American-born Israeli military settler Baruch Goldstein entered the Ibrahimi Mosque and launched a shooting attack against worshipers who were kneeling in morning prayer.

Meanwhile, Israeli soldiers based in the mosque’s area closed the doors of the mosque, to prevent worshipers from fleeing, and also blocked people from entering it to help save the wounded.

Other Palestinians were gunned down later, by Israeli forces, outside the mosque and during funerals for the slain, with the death toll, on this day, reaching 50; of them, 29 were killed inside the mosque.

Tensions heightened throughout the day, and violent confrontations erupted with Israeli soldiers, in all Palestinian towns and cities, and mainly in Hebron, bringing the total number of the fallen to 60.

Following the massacre, Israeli forces closed the mosque and all entrances to Hebron’s Old City for six consecutive months, allegedly for conducting an investigation into the incident.

A one-sided committee called “Shamga” was formed by the Israeli occupation, at that time, to investigate the massacre, and led to a number of recommendations. Of these, to be noted is the division of the mosque into two sections; 60% of it for the Israeli settlers, and the remaining 40% for the Palestinians.

The Israeli occupation also maintained a harsh reality of occupation against the Palestinian people of Hebron’s Old Town district, sealing off a number of markets and roads in the city, and installing security cameras and electronic gates on all entrances to the mosque.

Moreover, the Israeli occupation closed all  entrances to the mosque, in the face of Muslims, leaving one entrance with very strict military procedures.

With these procedures, the Israeli occupation has separated Hebron’s Old Town, in which the Ibrahimi Mosque is located, from its surroundings, with a view to Judaize and seize over them.

Baruch Goldstein is a Brooklyn-born Israeli physician. He had emigrated to Israel in 1983, and lived in the illegal Kiryat Arba settlement, based on the Palestinian lands of Hebron.

It’s noteworthy that the Ibrahimi Mosque is the fourth holiest site in Islam and the second holiest site in Palestine. It is located to the southeast of Hebron and at the heart of the Old town.