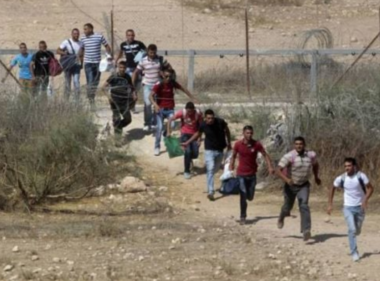 Israeli soldiers chased, on Wednesday morning, dozens of Palestinian workers near the gates of the illegal Annexation Wall, north of Tulkarem, in northern West Bank, and abducted a few of them.

Eyewitnesses said the soldiers fired several rounds at the workers near the wall, west of Atteel town, and chased them; no injuries were reported.

The soldiers also chased and abducted several workers, west of Zeita town, and abducted a few of them, before moving them to an unknown destination.

On Wednesday at dawn, the soldiers abducted 22 Palestinians, including five siblings, from several parts of the occupied West Bank, after the army invaded and searched dozens of homes, and interrogated many Palestinians.