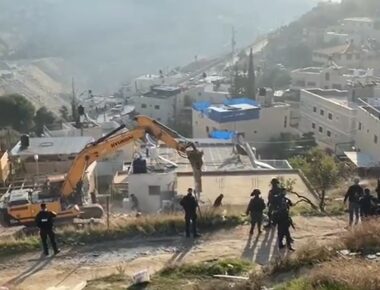 Updated: Israeli soldiers demolished, Wednesday, a Palestinian-owned home in Jabal al-Mokabber town, south of occupied Jerusalem in the West Bank, and injured many Palestinians during protests that took place after the home was destroyed.

Local sources said dozens of soldiers surrounded and isolated the town before invading it and headed towards the al-Bashir neighborhood.

They added that the soldiers prevented the Palestinians from entering the area, and demolished a home, owned by Hussein Bashir, under the pretext of being built without a permit.

Many Palestinians protested the invasion and demolition, before the soldiers fired several live rounds, rubber-coated steel bullets, and gas bombs, causing many injuries.

In Silwan town, the soldiers invaded Be’er Ayyoub neighborhood and isolated it from its surrounding area, the Wadi Hilweh Information Center In Silwan (Silwanic) has reported.

In addition, the soldiers invaded the Kafr Aqab neighborhood, north of Jerusalem, and invaded a store before confiscating surveillance recordings.