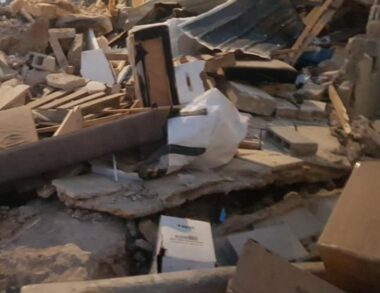 Israeli soldiers demolished, Wednesday, a Palestinian home in Jabal al-Mokabber, and several commercial facilities in Hizma town, in the occupied capital, Jerusalem, under the pretext of being built without permits.

Local sources said the soldiers, accompanied by bulldozers invaded the as-Sal’a area in Jabal al-Mokabber and demolished a home, owned by Mohannad al-Hroub and his family.

The sources added that, after receiving the demolition order, the Palestinian filed appeals with Israeli courts and received an order stopping the destruction of his property, but the City Council ignored the order and carried the demolitions out.

The Palestinian was not granted prior notice before the soldiers invaded the area and forced him and his family out, and demolished his two-apartment home, rendering eight Palestinians, including children, homeless.

The army claimed the facilities were built without permits from the City Council in occupied Jerusalem.

It is worth mentioning that Hizma is only 4.5 miles from Jerusalem, and eclipsed by the illegal Israeli annexation Wall; the Palestinians in Hizma lost 60% of their lands due to the illegal Wall.